It has been reported that Chelsea veteran Frank Lampard has jumped to the defence of England teammate Wayne Rooney. 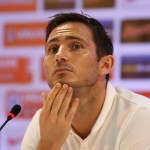 The Manchester United striker is under pressure after a flat performance in defeat to World Cup opponents Italy on Saturday.

The 35 year old said: “He’s an exceptional player, and if we’re going to go on and do well in this World Cup, players like Wayne will come to the fore, because that’s what they do.

“No matter how tough you are, if every time you read a paper or look at the TV and there are people debating your position, I don’t see that can be positive.

“Until Wayne pops up with a goal, the column inches will keep happening but it’s frustrating. We’re over-fixated on one player who has been our top scorer in qualifying and will break the England goalscoring record.”