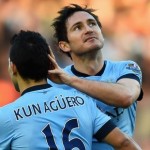 Reports are out claiming that Frank Lampard will be due an incredible £4 MILLION bonus if he helps Manchester City beat former club Chelsea to the title this season.

The Daily Star reported that the former England international is being paid £190,000 a week by the champions and will also land a £2m first-team squad bonus if Manuel Pellegrini’s men retain the trophy.

The 36 year old was due to join MLS team New York City FC next month after agreeing to play for Pellegrini until January 1.

However Lampard has been a huge hit at the Etihad.

Having been such a hit at City he is very keen to stay until the end of the season, which means he would more than double the £85,000 he is due to earn in America.

It would also allow him an emotional return to Stamford Bridge on January 31.