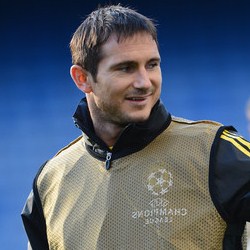 Chelsea midfielder Frank Lampard is expected to be fit for their blockbuster with Arsenal.

The London Evening Standard reported that Lampard and Daniel Sturridge are in a race against time to be fit for Chelsea’s match against Arsenal on Saturday.

Both teams are going into the game at Emirates Stadium defending unbeaten records in the League, although Chelsea are four points above of Arsenal in the table.

Lampard has been troubled with an ankle injury, which forced him to sit out the 6-0 League Cup victory over Wolves on Tuesday night.

The 34-year-old has only been able to do some light training so far but coach Roberto di Matteo remains optimistic he will be able to feature. Arsenal’s Petr Cech Eager To Get Rid Of Protective Headgear Only Myself To Blame For Barcelona Failure – Ex-Arsenal Midfielder Hleb