Reports have emerged claiming that Chelsea legend Frank Lampard is being linked with a shock move to Manchester City. 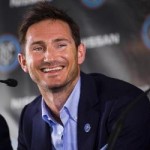 With the Major League Soccer season not starting until the spring, there was speculation that Lampard would head to Melbourne City, the third club owned by the City Football Group, on a short-term deal.

But reports emerged on Friday night that the 36-year-old was set to move to the Etihad on a six-month deal to help Manuel Pellegrini’s men in the defence of their Barclays Premier League title.

Manchester City must wait for Carlos Tevez and Samuel Eto’o