It has been reported that Chelsea will give Frank Lampard the chance to return to the club in the wake of his exit from New York City FC. 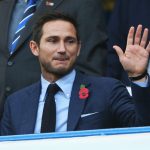 The 38-year-old midfielder announced on Monday that he would not be back with the MLS franchise for a third season but is yet to decide whether or not he will play on elsewhere.

If Lampard does happen to call time on his playing career, it is understood that Chelsea will offer him a coaching job.

Multiple outlets are reporting that the Blues are keen to have the club legend back at Stamford Bridge and will table something to him if he announces his retirement in a bid to avoid losing him to a rival club.

It is also understood that Sky want Lampard as a pundit and will offer him the opportunity to join their commentary team.