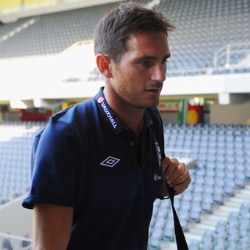 It has been reported that Chelsea midfielder Frank Lampard is eager to discuss a new contract.

The 34-year-old England international midfielder is uncertain what lies ahead even though he feels he can play at the top level “for a few more years”.

Lampard said: “We spoke once last season and it was a case of coming back – and it hasn’t come back from their end. I don’t know (what will happen).

“I would like to end my career there. I feel I can play at the top level for a good few more years, but it’s whether the club feels the same.

“I know there are a lot of changes at Chelsea. I’d love to be involved, and the youth coming into the squad this year has really freshened up our team.

“I’d love to carry on but it’s a club decision to come and sit down with me.

“They used to sit down with me three years before the end of my contract! Now I’m waiting.”