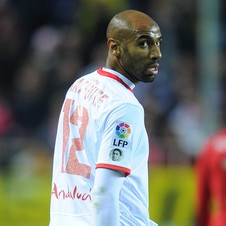 Sevilla striker Fredi Kanoute has declared that he wants to stay with the Spanish club.

Kanoute was being linked with Russian side Anzhi for the January market.

“I have decided to stay on at Sevilla,” said Kanoute.

“I’m positive that I will not leave the club in the January transfer market.

“It is true that I have received an offer from Anzhi but via my agent. I have not spoken to anybody at the Russian club.”