Reports are out claiming that Arsenal midfielder Francis Coquelin says a loan spell at SC Freiburg was the making of him. 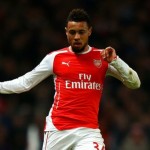 The French defensive midfielder has been impressive since breaking into the first team this season.

“[Going out on loan] has been really important for me,” Coquelin told Arsenal Player.

“I have been out a few times in France, in Germany and in England.

“The period in Germany helped me a lot, it was a tough, tough experience mentally and that was a turning point in my career. I’m happy I went there and learned a lot.

“It has been a few exciting months for me [recently]. I have come back from Charlton, gone into the team as a sub and now I’m in the starting XI, so I am really pleased with things at the minute.

“[January] was a big part of my career. It was the first time I played so many games in a row so I could show game by game what I could do. It was a big month for me with the wins we got and everything was positive.”