It has been reported that former Olympique Marseille chief Jose Anigo says everyone inside French football are stunned by Anthony Martial’s impact at Manchester United. 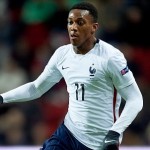 Writing for France Football, Anigo also recalls the disappointment of former Lyon chief Bernard Lacombe when he sold Martial to AS Monaco.

Anigo said: “I’m not going to pretend or play smart as some now saying that they knew for a long time that Anthony Martial could go so well.

“Of course I had noticed his potential and this explosion is so characteristic of the greatest. But to see him explode at such a level and with such speed … Who could have predicted this even six months ago that Martial would succeed at Manchester United in a few weeks?

“Frankly not many people.”

Anigo continued: “For me, what comes to mind are words exchanged with Bernard Lacombe at the time of sale of Martial to Monaco. He was a little bummed because he had already seen the immense potential of the boy.

“Forced to sell for financial reasons, l’OL has probably not had sufficient patience for this one…”

Sir Alex Ferguson : Danny Welbeck Will Get His Chance!