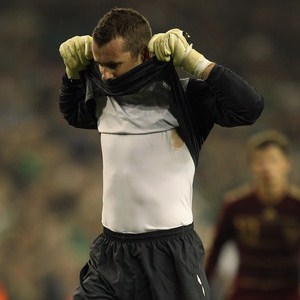 Shay Given has admitted that he expects to leave Manchester City this summer.

Republic of Ireland international, now age 35, fears his international form will suffer after spending all season on the bench since losing his place to Joe Hart at City.

And he confessed: “I’d like to be playing and I don’t know what will happen in the summer.

“I don’t know if being part of the Champions League will persuade me to stay — there’s a lot of questions I don’t really have the answer to.

“I know there’s a lot worse clubs you could be at than Manchester City, but I don’t feel match-sharp when I go to Ireland because I haven’t played.

“It’s frustrating, but the manager made his decision at the start of the season and that’s his decision.” Arsenal Eager To Tempt Patrick Vieira Away From Man City