Wayne Rooney’s late winner at Fulham helped Manchester United extend their Premier League lead to 10 points.
Rooney surged forward after 78 minutes to meet a Jonny Evans long ball and send a cool finish into the far corner for his 10th goal in as many games. 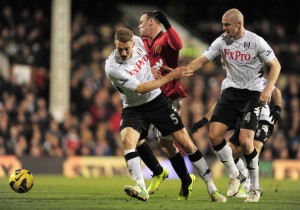 The striker had earlier hit the post in an open match in which both teams threatened, with Fulham’s Bryan Ruiz also denied by the woodwork.

Ruiz also had a header cleared off the line before Rooney won it. Rooney Plays Better When He Is Tough And Aggressive! – Moyes