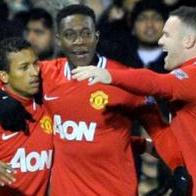 Manchester United enjoyed their second west London victory in four days as they brushed aside Fulham 5-0 to maintain the pressure on Manchester City.

Sir Alex Ferguson’s side continued the form they showed up the road at QPR on Sunday to secure three points that keeps them in touching distance of their rivals heading into Christmas.

United had failed to win on their past three visits to Craven Cottage but never looked in danger of extending that run, ending their hoodoo thanks to an imperious display.

Danny Welbeck capitalised on lax defending to break the deadlock within five minutes and the visitors extended their advantage when Nani nodded home a Ryan Giggs cross.

The 38-year-old’s performance in the capital belied his years and he became the first player to score in all 20 Premier League seasons when he saw a drive deflect off Philippe Senderos and loop in two minutes before the break.

Late goals from Wayne Rooney and Dimitar Berbatov extended the visitors’ lead further, although it was not to be a perfect night for Ferguson due to injuries to Phil Jones and Ashley Young.

Fulham, Everton To Do Battle For Valencia Midfielder Sergio Canales