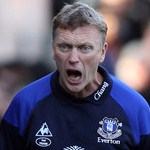 Royston Drenthe gave David Moyes’s troops a first-half lead with a third-minute screamer, before Fulham’s second-half substitute Bryan Ruiz came off the bench to level the scores with a breathtaking chip.

But Ruiz was then guilty of spurning a golden opportunity to win the game late on, which was only bettered by arguably the miss of the season from Bobby Zamora.

While the hosts were left questioning their wastefulness, the visitors swept up the other end and punished the hosts for the spendthrift shooting with two quickfire goals from Rodwell and Saha.