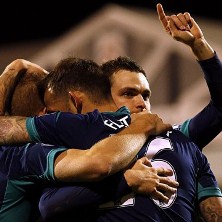 A red card for Fulham captain Brede Hangeland for a rash challenge on Lee Cattermole was the only action of a nervy yet well-contested first half.

A 50th-minute goal from Steven Fletcher, the striker’s first since a 1-0 win at Wigan in September, opened the scoring before substitute Mladen Petric levelled for the hosts.

Sunderland then scored twice within seven minutes of Petric’s equaliser, through Carlos Cuellar and Stephane Sessegnon, to eventually triumph 3-1 and pick up only their second win at Craven Cottage in the Premier League era.