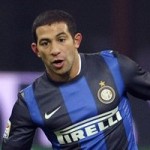 Transfer news from the Premier League is out claiming that Fulham are closing in on a deal for Napoli midfielder Walter Gargano.

The Daily Mail reported that the 29 year old Uruguay international spent last season on loan to Inter Milan but they failed to take up an option of a £6m permanent deal.

It is now said that Fulham are exploring a similar deal for a player who has 56 caps for his country.

His agent Alessandro Lucci is expected in London to discuss terms and he is keen on a move to England.

Spanish power-house Atletico Madrid are also said to be interested.