According to Fulham boss Martin Jol, midfielder Steve Sidwell has been offered a one-year deal at the club.

The former Chelsea midfielder could stay at Craven Cottage for another two seasons. 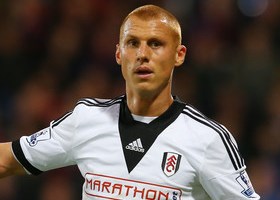 The 30-year-olds current contract expires at the end of the season and he could leave on a free transfer.

Jol told the Fulham & Hammersmith Chronicle: “Of course you feel a bit worried after the game.

“They all come back and instead of one-year deals they want three years you know and this is probably no different.

“For me Sidwell can stay for two years, for example. We are talking to him and offered him a one-year deal but who knows what will happen.”