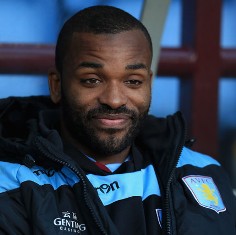 Reports are out claiming that Fulham are favourites for Aston Villa striker Darren Bent.

The People revealed that the 28 year old injured his hamstring on a rare outing in the Capital One Cup quarter-final at Norwich earlier this month. But he is due to return to full fitness by mid-January and Villa remain open to offers.

Fulham boss Martin Jol could meet Villa’s £8million asking price, though Bent might have to take a minor cut to his £65,000-a-week Villa wages to move to Craven Cottage.

Jol has money to spend after the £15m sale of Mousa Dembele and, although Fulham have four senior strikers in their squad, the Dutchman is keen for an out-and-out goalscorer.

QPR boss Harry Redknapp could also join the bidding, although his spending power at Loftus Road is limited.

Shay Given Set To Quit Aston Villa In January