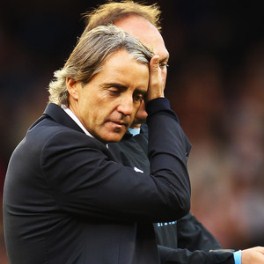 Manchester City threw away a two-goal lead to drop their first points of the season in an entertaining 2-2 Premier League draw with a spirited Fulham side at Craven Cottage.

Two goals from Sergio Aguero gave the David Silva-inspired visitors a commanding lead, but Fulham responded in superb fashion as they dominated the second half, drawing level through Bobby Zamora and Danny Murphy’s deflected effort.

Questions will be asked of City boss Roberto Mancini’s somewhat negative decision to replace Silva with a defender with the score at 2-1, but the hosts deserved their point and boss Martin Jol will be pleased at their resolve.

Fulham are still without a win in the league this season but this was arguably their toughest test, while City’s 100 per cent record was ended in entertaining fashion.