Arsenal legend David Seaman has declared that Gabriel’s dismissal against Chelsea was not justified. 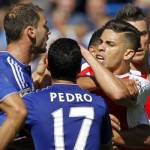 Gabriel saw red for kicking out at Diego Costa.

“For me the game was spoilt by the sending off. The actual incident itself was nothing – that happens all the time at corners,” the ex-Gunners goalkeeper told talkSPORT.

“The actual bit that he got sent off for was ridiculous. I feel embarrassed as a footballer that people are getting sent off for that kind of challenge – it wasn’t even a challenge, it was just a little flick.

“Normally that would just get laughed at. To get a red card for that and to change the aspect of the game was disappointing.”