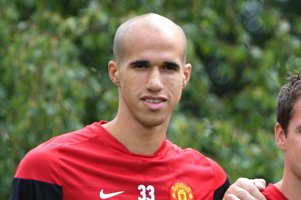 Gabriel Obertan has been reported to be ready to make his Manchester United debut later this month.

It has been reported that the France Under-21 international has been in full training this week after finally recovering from a spinal injury.

Obertan signed for Manchester United in the summer, but has yet to make an appearance because of problems with his injury.

The former Bordeaux winger stepped up his training last week and Sir Alex Ferguson is paving the way for his inclusion in the squad in the next few weeks.