Reports are out claiming that Arsenal signing Gabriel Paulista admits he was a fan of Gilberto Silva growing up. 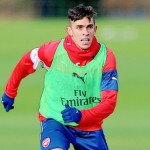 Gabriel is waiting to make his Gunners debut after his arrival from Villarreal last week.

“I remember Gilberto Silva because he was always with the Brazilian national team,” Gabriel told Arsenal Player.

“He was a mirror for every Brazilian player and every child, who looked up to Gilberto Silva as a reference. He was an influence for many players, not only Brazilians but players around the world.

“I could see that he was a major element here, he really helped the team, he really is a player I want to emulate because of his type of work and his will to help his team-mates, his will to win as a true Brazilian.

“To me he’s a mirror, so I will always take many good things I saw in him and take it to the pitch, and off the pitch as well, because I think he was an excellent professional who did many good things.

“I want to be like him, to be able to do the most I can to help everyone.”