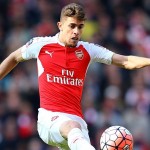 Reports are out claiming that Arsenal defender Gabriel Paulista has declared they WILL win the Premier League title.

Goals from Alexis Sanchez, Alex Iwobi, Hector Bellerin and Theo Walcott fired the Gunners to their first home win since Valentine’s Day as they thumped Watford 4-0 on Saturday.

“Not so long ago we lacked a little in confidence and we weren’t going into the match fully focused, so with a victory, we come back with a better self-esteem.

“Now, with the second win, it will make us grow more and I’m sure next time we will improve even more.

“The team are now very excited with the last two wins in the league, which were two difficult games, but we’re all thinking positively that we can win.

“We’re also hoping for some fault on Leicester and Tottenham’s part and if we carry on the way that we have been lately, that we can definitely win the league.”