It has been reported that Gabriel Paulista has spoken of his delight after completing his transfer to Arsenal. 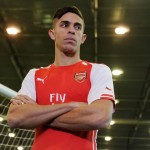 The 24-year old Brazilian centre-back has left Spanish side Villarreal to sign a long-term deal with the Gunners for a reported fee of around £13.5million and admits it has been a dream of his to join a club such as this.

“I came from a club that is not that big in Brazilian football. I went to Spanish football and that was another dream come true, to play in Europe,” the former Vitoria defender told Arsenal’s official website.

“I have only just arrived but I am already feeling really good here in London. I’m at a top club so that gives me more strength to be able to work and carry on, to be able to conquer much more in my career.

“I always watched Arsenal games and I could always see that it was a really big club with a great infrastructure.

“It’s a huge club, even more so than I expected. I am very happy with everything – with all the people I have been dealing with since I arrived.

“A while ago I had a really huge desire to be able to play in the Premier League, so since that point I put it in my head that I really wanted to do it.”

Gabriel arrives at the Emirates Stadium having made 50 appearances for Villarreal since his 2013 transfer from homeland outfit Vitoria.