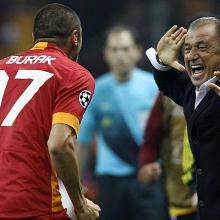 Manchester United got burned once more on their return to `Hell’ as Galatasaray ended their 100% record in Champions League Group H with a 1-0 win.

Burak Yilmaz’s second-half goal was enough to give the Turkish side a deserved victory and take them to the brink of qualification for the knockout stage.

United’s position in the last 16 was already confirmed so the damage, beyond any sustained as a result of the ear-splitting din, cannot be compared to the tumult that unfolded on United’s first meeting with Galatasaray in Istanbul 19 years ago.