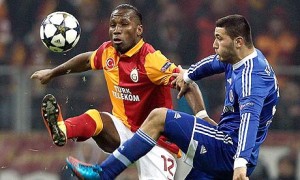 Didier Drogba impressed on his Champions League debut for Galatasaray but the Turkish side were held to a 1-1 draw by Schalke in an entertaining last-16 first-leg match.

The Ivory Coast striker, who moved to the Istanbul club last month after a spell in China, linked up well with Burak Yilmaz in attack. Yilmaz scored his seventh goal in seven Champions League matches, putting Galatasaray ahead in the 12th minute when he picked up a pass from Selcuk Inan and flicked the ball round a defender to power a shot past Timo Hildebrand.

Schalke equalised in the closing seconds of a pulsating first half. The visitors broke quickly, Jefferson Farfán passing across goal to Jermaine Jones who side-footed past Fernando Muslera, leaving the German side well placed for the second leg.

Wesley Sneijder, another big-name acquisition by Galatasaray, was less impressive than Drogba and was substituted after the first half.