Reports are out claiming that Galatasaray are making a move for Manchester United goalkeeper Victor Valdes. 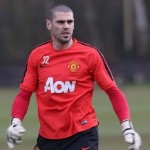 United boss Louis van Gaal has told the Spaniard to find a new club after the pair fell out last month.

AS says Gala are keen on Valdes and open to signing the keeper on a free transfer.

Valdes would arrive as cover for Fernando Muslera, who is rated as Gala’s outright No1.

For his part, Valdes is keen to hear from Gala, which can offer Champions League participation this season.