It has been reported that Galatasaray are ready to make a January bid for Arsenal attacker Joel Campbell. 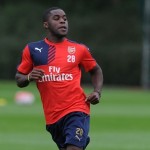 Fanatik reported that Galatasaray are poised to make a move for Campbell, viewing him as an ideal replacement for former Gunner Lukas Podolski, who is expected to leave Galatasaray for Germany when the window re-opens.

Despite capitalising on injuries to break into the first team in recent weeks, the Costa Rica international has struggled for appearances since being recalled from a number of loan spells.

The 23-year-old is expected to find himself on the sidelines again soon, with a number of first-team regulars expected to return from injury.