Reports are out claiming that Galatasaray remain keen on Arsenal striker Joel Campbell. 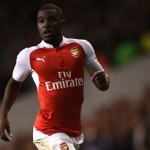 Fanatik reported that they will submit a January bid for Campbell.

The striker has failed to break into the Arsenal team this season and will be allowed to leave the club if an appropriate offer is made.

Gala are currently struggling for strikers due to an injury crisis, with Lukas Podolski being their only player who can play in that position.

They will look to bring the Costa Rican striker when the transfer window reopens.