Reports are out claiming that Chelsea midfielder Marko Marin is a target for both Schalke and Galatasaray. 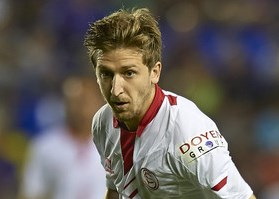 The Germany international star is currently on a season-long loan at Sevilla but the Blues could cut that short in order to offload him in January.

The 24 year old has hardly featured for the Blues since joining from Werder Bremen in the summer of 2012 and has also experienced very little game time in his first half-season with Sevilla.

Transfermarkt.de suggests Schalke manager Jens Keller wants to use Marin’s Bundesliga experience while todomercadoweb.es is of the belief that Galatasaray boss Roberto Mancini is keen on luring him to Istanbul.