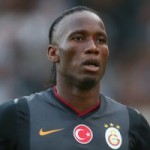 West Ham United target Salomon Kalou has revealed that Didier Drogba is hopeful of finishing his professional career in the United States.

The Lille winger told Goal.com that his international compatriot is keen to move to the MLS, with the Los Angeles Galaxy looming as a possible destination.

The Ivory Coast international has another 12 months remaining on his contract with Galatasaray, with his future beyond next season unclear, although Kalou insists the MLS is one of the 35-year-old’s biggest ambitions at present.

Kalou said : “He loves America, he always goes there for holidays and it’s a place he always enjoys,”.

“For him to work there would be an amazing experience. I think that’s his goal and that’s where he wants to finish [his career].

“He hasn’t told me directly, but he has told me that finishing in New York or LA would be amazing experience. I know that’s in his mind right now. He would love to finish there.

“Didier is the type of guy who never goes to a place without making an impact. For him, going to MLS is a great thing because MLS is developing as a football league. I think having Didier in that league would give it an extra boost and continue to help the league develop.”