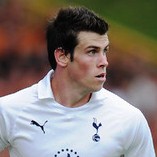 Reports are out claiming that Gareth Bale is flattered by interest from Barcelona.

The Welsh international winger was reportedly watched by a high-ranking Barca official at Fulham last week.

“It’s always nice being linked with clubs such as Barcelona – it’s great to be linked with a team like that,” Bale told the Daily Post.

“I’m enjoying my football at Spurs and I don’t really take much notice of what is written about interest from other clubs.”