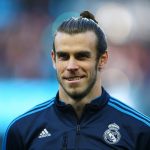 Reports are out claiming that Real Madrid star Gareth Bale was impressed by Manchester City for this week’s Champions League semifinal.

City have made it to this stage of the competition but given their financial backing there is no reason to believe it will be the last.

“You can see they are a very good team and they have some great players, we know a lot about them and we watch them all the time in Spain,” Bale said.

“They definitely belong among the European elite now. They are here on merit. They haven’t got here by luck.

“I’m surprised they haven’t got to this stage of the Champions League a little earlier, but they have great players, the club is still growing and they are going to be a force to be reckoned with.” Real Madrid To Offer €50 Million Plus Players For Arturo Vidal