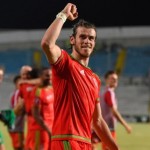 Reports are out claiming that Wales match-winner Gareth Bale is not getting too ahead of himself following Thursday night’s 1-0 win over Cyprus.

The Dragons remained on top of Group B of Euro2016 qualifying with a narrow victory in Nicosia which came courtesy of Bale’s 82nd-minute header.

Wales are now just one win away from qualifying for the UEFA competition in France next summer but Real Madrid star Bale insists the focus remains for he and his teammates.

“I don’t think I had the best of games tonight but when there’s a chance hopefully I can tuck it in,” he told Sky Sports.

“Sometimes it happens like that. Luckily enough I did tonight and it has given us an important three points.

“We knew the task coming in and obviously there has been a lot of media surrounding us. We know what we have to do [against Israel] but we’re a strong team.