It is said that the 24 year old Welsh wing wizard believes he has an understanding with Spurs chairman Daniel Levy that the club would accept a mind-blowing bid. 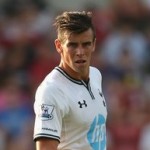 According to Marca, Bale told Levy: “You made me a promise. You promised me if we didn’t qualify for the Champions League and a good offer turned up you’d listen to it.

“Well that offer has arrived and I want to play for Real Madrid. So keep your word and negotiate.”

It is said that the former Southampton winger met Levy and made it clear he no longer saw his future at the Lane.

Spurs boss Andre Villas- Boas claimed ahead of today’s game against South China that contract negotiations with the Welshman were ‘ongoing’.

Yet Spanish sources claim no such talks have taken place since 2012.