According to Real Madrid president Florentino Perez, Gareth Bale could be fit to play in their home Primera Division match against Malaga on Saturday. 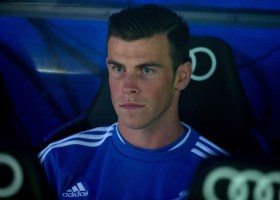 The former Tottenham superstar has made just one start since he arrived at the Bernabeu for a world-record fee in the summer as injury has kept the winger sidelined.

Madrid were, at the weekend, moved to deny a report in Spain that Bale was suffering with a slipped disc in his back, rubbishing the claim as “completely false”.

While Perez concedes Bale’s injuries have been a worry, he believes the Welshman is ready to make a return – for the first time since the Madrid derby defeat on September 28 – against Malaga.

“(He is) calm and ready, waiting to play on Saturday,” he told Spanish radio programme Punto Pelota.

“Everyone knows that, because he didn’t have a good pre-season, he suffered from muscle fatigue in the thigh.

“He is training well and wants to play and show that all this is just something over nothing.

“Bale is fit to play and wants to show that he is fine. All of the doctors have made it clear that a small disc bulge is relatively common in elite footballers.

“Not all athletes have scans, so not all of those that have these disc bulges know they have them. Ronaldo Dedicates His 5 Goals Against Espanyol To Real Madrid Teammates