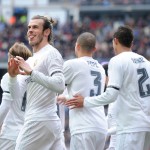 Reports are out claiming that Wales coach Chris Coleman has urged Gareth Bale to stay with Real Madrid.

Bale has been linked with Manchester United and Manchester City this week.

“When you’re in the Premier League we all know how it is… a battle every week. It’s flat-out and if you are below 100 per cent you get found out. It is a physically demanding league. It’s a fantastic competition and up there with the best leagues in the world.

“But, in Spain, it doesn’t cause as much fatigue during the second half of the season. The quality is there, but the physical demands on players are different.

“But wherever Gareth plays his club football he will always have the full backing of me and everyone in the Wales set-up.”