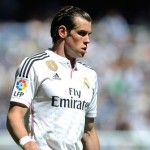 It has been reported that Chris Waddles believes Gareth Bale should reject a possible return to the Premier League in order to fight for his spot at Real Madrid.

The Welsh winger, 25, has been incessantly criticised for his performances with the Spanish giants in recent times which has prompted speculation regarding his future at the Santiago Bernabeu.

Bale has been linked with a summer move to Chelsea while Manchester United have been credited with a healthy interest but ex-Tottenham and Newcastle United winger Waddle has implored him to stay put in Madrid.

“He has not won over the fans, he is struggling a bit with injuries and as a result is lacking in confidence,” Waddle said in an interview with The Express.

“But he has to stick his chest out, tell his teammates to pass to him and show them how good he is.

“I don’t know him very well but he seems like a quiet, shy lad. He is not like (Cristiano) Ronaldo, who has a presence about him, or the many other egos in the Real Madrid team, all of whom want the ball.

“He doesn’t have to be arrogant, just a little bit more confident. Let team-mates know you are upset when they don’t pass you the ball. Demand the attention. And then when he gets the ball, he needs to be a bit more aggressive.

“He needs to remind his team-mates he can win matches for them. If you are playing well, players will always give you the ball.”

Waddle added: “He was the main man at Tottenham, he always got the ball.

“I am sure he is not one to sulk, but he needs to recognise and get used to the fact his is now playing with 11 of the best known players in the world.”