It has been reported that Wales coach Chris Coleman has urged Gareth Bale to stay with Real Madrid. 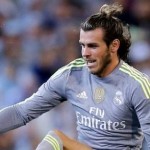 Bale has been linked with a move to Manchester United.

“It’s a top league but doesn’t have the physicality of the Premier League, which is the most unforgiving league in the world.

“There is pressure in playing for Real Madrid but Gareth is one of those players who can handle that.

“From my point of view as Wales manager, I’d be happy if Gareth remained where he is.”