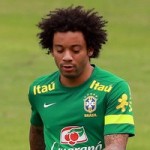 Real Madrid fullback Marcelo is hoping that the club is successful in their pursuit of Tottenham star Gareth Bale.

While Brazilian international admits he rates Bale, the 25 year old was wary of commenting too much on the situation.

Marcelo said: “I’ve played against him. He’s a great player. But I don’t know him that well.

“It’s up to the club really. I’d rather not say who should or shouldn’t be on the team.

“If he does come to Madrid he’ll be welcome.”