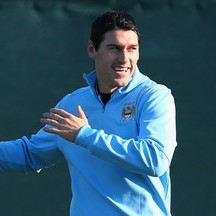 The former Aston Villa star admits that he does not find it easy.

“It’s tough to be honest,” he told the Telegraph.

“I obviously think I should always be picked. Every player thinks he’s good enough to be playing every week.

“When you’re told you’re going to miss out, initially, that first hour after the manager’s named the team, you’re really disappointed.

“You can’t imagine anything worse. But you can’t show that, you’ve got to go out there and support the lads. You’re a team player.

“After the game, it’s a clean sheet, you’re back in training and you’ve got to impress the manager, force your way back in the team. It’s the only way to approach it otherwise you’re letting yourself down and your team-mates.”