It has been reported that England U21 coach Gareth Southgate believes moving to Manchester United will up Luke Shaw’s game. 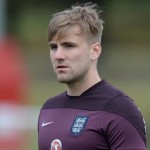 The 19-year-old was one of many additions made by boss Louis van Gaal along with Angel Di Maria and Radamel Falcao.

“I think what he now has is a recognition of what ‘world class’ looks like,” Southgate told the Mirror.

“He might have had an idea of what he thought it was before, but training at Manchester United with the likes of Radamel Falcao and Angel di Maria has given him a full understanding of the concept now.

“He would have known there was a level, but now he knows there is a level above that.”