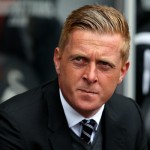 Reports are out claiming that Swansea City boss Garry Monk is pleased to hear praise from Arsenal manager Arsene Wenger.

The French tactician chose Monk as his manager of the year for the job he has done in his first full season in charge at the Liberty Stadium.

“It’s brilliant to hear that and I appreciate it greatly,” Monk said ahead of Swansea’s trip to the Emirates Stadium on Monday night.

“The pleasing thing for me is that Arsene is so experienced and has been at the top of his game for so long. It is a massive compliment.

“We are going in the right direction, so the recognition is good for me and my staff and I appreciate it.”