Reports are out claiming that Chelsea defender Gary Cahill believes Arsenal are genuine title contenders this season a following 1-0 win over the Blues at Wembley on Sunday in the Community Shield final. 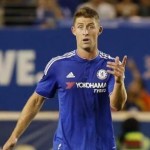 The victory was Wenger’s first against a Mourinho-led Chelsea side in 13 previous attempts.

“They’ve started well, they’ve got a good squad and I think they’ll be one of many pushing at the top this season,’ he said.

“I’m sure everyone has that belief at the start of the season. People talk and talk, but the bottom line is when the season starts.

“We’re confident, we have a good squad and still have another game on Wednesday [against Fiorentina], and more time to train before we start.

“We’ll be strong, but it’s a tough league and everyone else will be strong as well.”