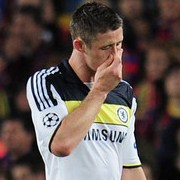 Gary Cahill is supremely confident he will recover in time to participate in Chelsea’s upcoming finals.

The Blues meet Liverpool in the FA Cup decider at Wembley on May 5 before traveling to Germany to take on Bayern Munich at the Allianz Arena in the Champions League final on May 19 and Cahill is determined to play despite injuring his hamstring against Barcelona on Tuesday night.

“”To miss these games coming up my hamstring will have to be absolutely torn to shreds,” he said. ”