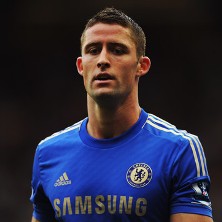 Chelsea defender Gary Cahill has admitted that he is frustrated with Roberto di Matteo’s rotations.

The 26-year-old England international centre back is concerned he is too often made the odd man out.

The former Bolton defender has made seven starts this season, but sat out of big games against Juventus, Arsenal and ­Shakhtar. Luiz, whose form remains erratic, has started 11 games.

“It has been frustrating for me at times this season, I’m not going to lie – like on Tuesday night in the Champions League, the rotating,” Cahill told the Sunday Mirror. “I think you can accept it if you are playing the same amount of games as everybody else. That’s the only way you can come to terms with it.”

Asked if he believes he should be given a greater share of the action, Cahill reiterated: “That’s how you come to terms with it.”