Reports are out claiming that Chelsea are ready to upgrade Gary Cahill’s contract. 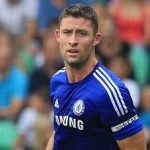 The People reported that Chelsea want the England international to sign a new contract before the season starts.

The 28 year old is being awarded an extension following a great start to his career in west London.

Cahill arrived from Bolton in a £7million switch in 2012, and is now a regular for club and country.

He has been in discussions with Stamford Bridge officials, and bosses are now ready to hand him a contract worth around £120,000-a-week until 2018.