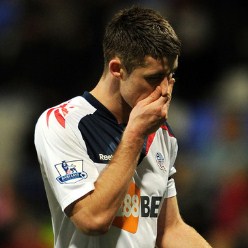 Reports have emerged that Chelsea have agreed terms with Bolton Wanderers for defender Gary Cahill.

The Sun revealed that the England international star will swap the relegation scrap for a title battle with a £7million switch to Chelsea next month.

Bolton will allow the centre-back to discuss personal terms as soon as the busy Christmas period is over after a fee was agreed.

Cahill will complete his dream deal in early January, barring any late hiccups.

Tottenham — long-time admirers of the Bolton star — could yet make a dramatic move to scupper the deal with a late bid.

But Cahill, who is out of contract at the end of the season, believes his future lies at Stamford Bridge in a move that will boost his chances of making England’s Euro 2012 squad.