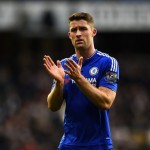 Reports are out claiming that Chelsea have confirmed that Gary Cahill has signed a new contract with the club.

The 29-year-old centre-back has penned a four-year deal with the Blues which will keep him at Stamford Bridge until the summer of 2019.

Regarding his commitment to the reigning Premier League champions, the England international told the club’s official website: “I’m really pleased to commit my future to Chelsea and it’s great the club has put their faith in me.

“I have achieved a lot here and I hope I can keep on learning, helping the team and lifting trophies over the next four years.”

Since arriving in West London from Bolton in 2012, the England international has made 177 appearances in all competitions for Chelsea, scoring 15 goals.

Samuel Eto’o Struggling To Be Fit For PSG Clash