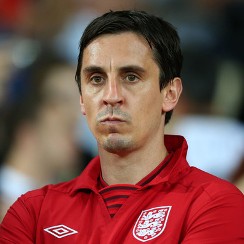 Manchester United legend Gary Neville has declared that Arsenal lack self-belief after their defeat to Chelsea.

He wrote in the Mail on Sunday: “Arsenal weren’t bad at the Emirates on Saturday. In many ways they continued their encouraging start to the season. But at important times, and in crucial areas, they were second best. I understand that Arsene Wenger talked about a lack of personality and authority in his team and that sums it up perfectly.

“Whether it’s a figure such as Steve Bruce, as I had at Manchester United, or Terry, as Chelsea have now, you need players in your team who you can look to and know that they’ve been in these situations before and have come through to win.”