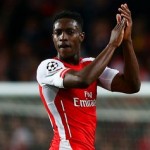 The England international striker hit a hat-trick in the Gunner’s Champions League win over Galatasaray.

“But remember what Arsene Wenger did when Thierry Henry came to Arsenal. I played against him as a 17-year-old at Monaco and he was very raw as a left-winger. His control was poor and he wasn’t a goalscorer in those early years.

“When he went to Arsenal it just took off for him and if Arsene Wenger can work with Danny Welbeck in the same way as he did with Thierry Henry he will get an absolute bagful of goals if he is consistently playing.”